What are you afraid of? The dark? Heights? How about your own potential?

Fearless leaders do not wilt in the face of adversity. They laugh in it. According to Inc.com’s Francisco Dao, “There is one particular component of leadership that is so important, so necessary, that without it, leadership cannot exist. That component is confidence.”

Do you have it?

“There is one particular component of leadership that is so important, so necessary, that without it, leadership cannot exist. That component is confidence.”

I am certain you have taken risks that required a little, and sometimes a profound, measure of courage. Perhaps you ran a marathon, admitted you were wrong, became a parent. Why are the same people who display such acts of bravery in their personal lives often stymied at work in leadership roles?

I get it. You have adult-sized responsibilities. A mortgage. Car payments. People depending on you. Playing it safe at work is a means of survival. But great leaders aren’t merely surviving. They are trailblazing, marching into uncharted territories, even when things start to get a little scary. They could not execute these acts of bravery without a certain level of enviable self-confidence in the work place.

Forbes’ Glenn Llopis aptly notes, “Confidence is a game changer and you know when someone authentically possesses it – because you can genuinely feel it. They have powerful executive presence and trust their own abilities and character enough to be vulnerable, even self-deprecating.”

You know what? Having the confidence to take educated risks in marketing leads to breakthroughs, profits and increased engagement with your brand.

Having the confidence to take educated risks in marketing leads to breakthroughs, profits and increased engagement with your brand.

According to Ad Age’s Bob Liodice, “Risk-taking, of course, is both exciting and scary…but ultimately, without the risks, brands never achieve the best rewards.” 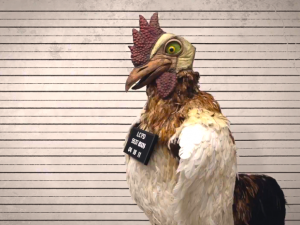 Burger King risked wounding brand image in 2004 when brave executives introduced the Subservient Chicken, a human-sized mascot who let fans “have it your way” by responding to over 300 web-based commands. The campaign was so successful that Burger King recently announced it would be resurrecting the “fowl” initiative.

In the early 1960’s, Avis gambled on its “We’re No. 2. We try harder because we have to.” campaign, and soon discovered that consumers positively responded to the company’s frank and honest approach to advertising.

Furthermore, in 1953, Anheuser-Busch tried to buy the naming rights to Sportsman’s Park, where the St. Louis Cardinal’s played. The company’s proposal was initially rejected, but executives at Anheuser-Busch were so sure they had a stellar idea, they persisted until the sponsorship was accepted. Stadium name backings are commonplace today thanks to Anheuser-Busch’s game-changing idea. 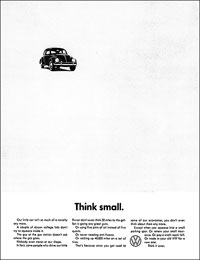 Doing something that’s never been done before takes guts. The idea may or may not work, but when it does, the results are epic. Cult brands take risks and can achieve truly remarkable results that get people talking. We’re still referencing Volkswagon’s iconic ‘Think Small’ campaign, while Nike’s command to “Just Do It” feels as fresh as it did thirty years ago.

Doing something that’s never been done before takes guts. The idea may or may not work, but when it does, the results are epic.

Why don’t we step out with swagger and go for it? Even if we’re unsure our ideas will fly? The primary culprit is that we often don’t believe in ourselves. This has to stop. So many great ideas, innovations and breakthrough products are aborted in their early stages, because people in leadership roles simply don’t possess the confidence to give them an honest try. How do I know this? I used to be a self-doubter myself and at times I still am. But when I do take the risk and embrace my inner courage, the results are outstanding.

To be clear, I do not endorse reckless and uneducated marketing tactics. Do your research before you dive in, or you could bonk your head in some seriously shallow water. Strategy always comes before execution, but steer clear of the “here we go again” approach.

The ordinary stuff might make your boss happy in the short run, but it won’t move the needle. 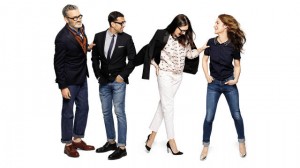 Clothing retailer J.Crew has experienced a fashion renaissance in the last five years, thanks to the leadership of President and Creative Director, Jenna Lyons, and Chairman and CEO, Millard Drexler. With them at the helm, J.Crew has evolved from the staple brand of preppy, old world Yacht Clubs into a formidable force in the fashion world today. With a cult following and famous fans such as Michelle Obama and Anna Wintour, J.Crew is onto something big.

This new generation of leaders make decisions with their guts, not their spreadsheets.

This new generation of leaders make decisions with their guts, not their spreadsheets. They govern based on what they intrinsically know to be right. The Lyons-Millard pairing is a perfect example of confidence trumping forecasting reports. According to Fast Company, “Their partnership would mark the end of the days when J.Crew’s product design was dictated by corporate strategy. Together, [Lyons and Millard] would make and sell only what they loved. The love would not be unconditional; they would adjust their product line always, trying new ideas, assessing, and quickly getting rid of anything that didn’t work. Under Drexler and Lyons, J.Crew would become a company of constant and freewheeling experimentation, iteration, adaptation.”

Lyons and Drexler exemplify the ability to formulate an idea, execute it, and recoup and try again if need-be, all whilst possessing the insane self-assuredness that producing what they love, rather than adhering to any strategy report, will reap the greatest rewards.

Cult brands are not afraid to fail.

To borrow a quote from prolific speaker and best-selling author, John C. Maxwell, “Sometimes you win, sometimes you learn.” Mistakes are just another way of doing things. They move us forward.

I hope you brand leaders and aspiring brand leaders out there feel empowered to step into the unknown and do something that you know could take your business to the next level.

Ryan began his professional life in digital marketing. His first company, Suitcase Interactive, was a consistent best-digital-agency award winner. And his tenacity and forward thinking also led him, personally, to being awarded a coveted place on the auspicious 40 under 40 list. (Notice that we're not telling you how many years ago that was, we're kinda attached to our kneecaps ; ) Those seminal years also led Ryan to the enlightenment that the whole concept of advertising and digital agencies was dead. From there it was a short putt to the birth of Cult, one of North America's first true engagement agencies. As Cult's President, his legacy as a pioneering thinker has blossomed from pushing pixels, to pushing forward what marketing actually means. Ryan then founded The Gathering in 2012, an annual international event to honor cult-like brands that put the generation of movements before the creation of ad campaigns. The Gathering is now widely acknowledged to be one of North America's premier annual marketing conferences. And it's an idea that has introduced Cult to brands like Keurig, Converse, Airbnb, UFC, Las Vegas Tourism and Red Bull, among many others… hey, there's only so many names you can drop in one bio. Never one to whine about the status quo, but rather put his energy into finding a better way, Ryan’s latest innovation is the founding of a whole new operating model for marketers, both on the client side and in the industry that serves them. Called Communo, this tech-enabled work model is an incomparable brain trust of talent for brands, a human resources platform for marketing professionals, and an unprecedented business development engine for both. In his "spare time" Ryan continues his strong commitment to giving back, both at home in Calgary, and around the world. He spearheads Cult's ongoing monthly commitment to Ronald McDonald House and continues to lead Project Smile, the international relief organization he founded over a decade ago. He even managed to find some spare, spare time to co-author three editions of Fix: Break The Addictions That Are Killing Brands, Cult's thought leadership book that's changing the way CEOs and CMOs see the marketing function.
Further Reading
See All
Carson McKee
February 14, 2022