Can Coors Light Advertise Its Way out of Slumping Sales?
Experts say cult brands win by emphasizing engagement over advertising.

We see it all the time at Cult. A client knocks on our door in the hopes that better advertising will renew interest in their brand and boost sales revenue.

And sometimes it does. But the benefits are usually short lived.

Be it known that we here at Cult are not anti-advertising. It’s just that, in our expert opinion, more, better advertising is often not the answer to a brand’s woes. Sometimes advertising is actually the problem.

Too many brands spend too much time, effort and money on quick-fix solutions that drive short-term sales instead of addressing problems that really require long-term strategies to drive consumer engagement, brand affinity and loyalty. But ads are an easy answer. They offer a quick fix, and can therefore be highly addictive.

Too many brands spend too much time, effort and money on quick-fix solutions that drive short-term sales.

This seems to be the case with Molson Coors, who have pointed the finger at Canadian NHL teams, blaming their short post-season runs on slumping sales of the brewer’s signature Coors Light.

Their plan? “Aggressively step up its advertising for the rest of the year as it looks to reverse market share losses and spur volume growth in its two largest markets – Canada and the United States.”

Is this the answer? Last year, Molson spent $138 million to drive awareness and demand for Coors Light, according to Kantar Media. In contrast, they only spent $17 million to promote Coors Banquet, a sister brand that’s been enjoying a surge in sales.

Could this be the law of diminishing returns at work? Or maybe it’s not about “how much” advertising but “how” that really matters.

“The Advertising Research Foundation proved a long time ago that creating awareness was the longest road to profitability a brand could take,” wrote Bob Passikoff of Brand Keys, a consultancy that tracks and studies the customer engagement and loyalty levels of thousands of brands. “Unfortunately, most brand leaders continue to rely on awareness-based marketing to solve business challenges. Despite paid media advertising growing by over $100 billion in annual spend since 2000, most brands lost meaningful differentiation during that time period and consumer engagement waned.”

Despite paid media advertising growing by over $100 billion in annual spend since 2000, most brands lost meaningful differentiation during that time period and consumer engagement waned.

Has Molson simply advertised Coors Light to the point of consumer indifference? After all, beer drinkers have been abandoning the mainstream and mediocre in search of new and exciting brews that inspire interest and reflect a more desirable sophistication. On the rise of Coors Banquet, Pete Coors himself explains, “People are really curious about more flavorful beers right now. I think we’re in a perfect place.”

Morningstar reports that while beer volume has been declining in all of Molson’s developed markets, the above-premium (craft) market has been growing, along with Molson Coors’ own craft portfolio.

Presumably, the folks at Molson recognize this. Why not shift resources to promoting the craft portfolio where it appears that every dollar invested here is having a greater return than with their mainstream brands? A potential obstacle here is the fact that millennials are tuning advertising out. Earlier this year, Forbes reported only 3% of millennials are moved by moved by traditional advertising.

For one thing, marketers have become extremely good at measuring advertising effectiveness (big brands are particularly savvy at this). Projections are made; goals are set; funding is allocated; media is bought; creative is produced; ads are deployed; results are assessed against the goals. The data helps marketers draw a connection between advertising investment and sales impact, and those little blips on the graphs can become the equivalent to a drug high for some brands.

In his keynote at The Gathering 2015, Chris Kneeland explained, “Our observation is most brands are overly dependent upon mass advertising and sales promotions rather than doing ‘real’ marketing”. And, despite the billions of dollars companies like Molson Coors continue to spend on mass media, Chris notes, “Consumers are simply too overwhelmed by all the advertising stimuli we bombard them with, and they have become expert and learning how to shut them off or fast forward past them. A yell-and-sell go-to-market approach doesn’t make sense anymore.” 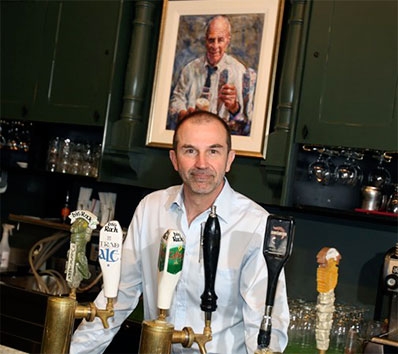 Bob Sartor, CEO of Canada’s largest independent craft brewery, Big Rock postulates, “Coors Light marketing is already at saturation levels and I think it will be wasted money. The launch of Miller Lite is also impacting their business.” These observations from a regional brewer who spends almost nothing on traditional mass media advertising tactics, and whose business grew by 14.6% last quarter (in spite of the NHL playoffs). “Our latest BC beer is on fire,” adds Sartor.

And, if Miller Lite actually is stealing drinkers away, clearly advertising hasn’t bought Coors Light brand loyalty. Ads, promos and discounts might sell beer in the short term, but it certainly doesn’t build long-term brand affinity or fortify any meaningful competitive advantage. Those tactics seem only to promote brand promiscuity.

Ads, promos and discounts might sell beer in the short term, but it certainly doesn’t build long-term brand affinity or fortify any meaningful competitive advantage.

By contrast, companies like Big Rock have shifted their marketing investments away from advertising, swag and discounting towards things that drive consumer engagement with their brands: Things like brewing and distributing remarkable beer; brand storytelling, digital content and event experiences; improving corporate culture and hiring better talent; and expanding their physical footprint to serve local markets on a small scale. “Temples of brand worship,” as Sartor likes to call them.

The reallocation of advertising dollars means brands can focus on things that matter most to consumers, like delivering a more remarkable product or service, creating a more compelling customer experience, or engaging them in new ways that serve to increase their relevance and heighten brand affinity. Brands like Apple, Lululemon and the Dallas Cowboys have become among the most valuable in the world by redeploying dollars towards non-traditional marketing strategies and tactics that would have been earmarked for mass advertising at many of their category peers. Undistracted by advertising, these brands can stay steadfastly focused the long game that’s earned them the cult-like loyalty of customers, and in turn, a formidable competitive advantage.

The reallocation of advertising dollars means brands can focus on things that matter most to consumers, like engaging them in new ways that serve to increase their relevance and heighten brand affinity.

In the wake of economic recession, increasing advertising spending can seem somewhat irresponsible. Brands that emphasize engagement over advertising have proven recession-proof and weather economic turbulence better than their mediocre counterparts. Molson’s increased ad spend will undoubtedly see a surge in Coors Light sales, but likely won’t recession-proof (or playoff-proof) the brand.

Brands that emphasize engagement over advertising have proven recession-proof and weather economic turbulence better than their mediocre counterparts.

Changing a brand’s marketing focus from advertising to engagement can be a difficult process, to say the least. It requires not just a change in mindset, but a shift in corporate culture towards valuing goals that are longer term, and not just focused on short term sales results. Sometimes this mentality goes all the way to the top, as shareholders and analysts look to sales as a benchmark for company performance. To those brands, advertising has become a necessary means to essentially “buy” customers. To the more enlightened, like Geek Squad Founder, Robert Stephens, “Advertising is a tax brands pay for being unremarkable.”

For the past 17 years, I've worked with consumer, b-to-b and non-profit brands to strategize and execute effective marketing communications that get results. Now, I help organizations find, acquire and serve customers in new ways that foster deep brand affinity and loyalty, and in ways that deliver measurable results and return on engagement
Further Reading
See All
Chris Kneeland
April 4, 2020