When brands do something remarkable, it is always a good idea to dissect their moves, and learn from both the good and the bad. After letting the dust settle and giving ourselves time to see all angles of the story, we thought it was about time that Cult weighed in on the recent deal struck between Starbucks and Arizona State University.

For those of you who aren’t completely up to date on the initiative, you can learn about the nitty gritty details here.

So What’s The Initiative? 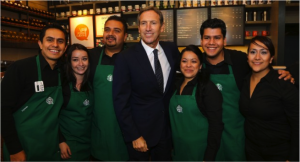 To give a quick break down, on June 18, 2014 Starbucks announced a partnership with Arizona State University in which it would be offering its employees “free” online classes in order to help them get their degree while working at Starbucks. The most amazing part? Employees didn’t even have to stick around and work for the company afterwards.

Starbucks was doing this all out of the goodness of their heart. Or so we thought…

A few days after the announcement and the accompanying media blitz heralding Starbucks as a pioneer in employee care, the little nuances that the coffee giant did not mention started to come out. Like a thread from a sweater their perfect plan and goodwill began to unravel. Instead of the kind gesture many believed the company was making, mainly due to the video the company itself released, it turned out this initiative was not truly that grand of a gesture. In a statement released by Arizona State University, the school stated that Starbucks was not actually providing any money towards their employees’ education, instead the two entities had reached a discounted rate agreement and social support and other financial aid would cover the remaining fees. That is much less impressive than the image many had in their head of the chain paying thousands of dollars out of their own pocket to help out its employees.

What it Means For Brands

Regardless of the details of the deal and how it actually pans out, it is the notion behind the plan that needs to be dissected. Starbucks might not be the fairy godmother that the employees were hoping for, but it is a step in the right direction, regardless of how small that step is.

When looking at the Anatomy of a Cult Brand, our favourite reference material, we state that “Be Inspirational” is one of the 6 main components that make up the most successful of brand mantras. In this case “being inspirational” refers to companies that inspire from the inside out, first creating a superb employee culture before letting this infectious positivity spill over to consumers. See where I am going with this?

If a company does not have the loyalty of its own employees how can it expect to impress customers?

Starbucks, while not the first to attempt a program of this sort, is definitely one of the bigger and more prominent brands to take the initiative. It says to all, “We care about our employees, we see them as people first, and want to do our best to help them achieve their dreams.” Does it get more inspirational than that? Companies like Westjet with their “owner over employee” philosophy and the empowering Whole Foods are other great examples of companies that are focusing on inspiring from the inside out.

What this also means, is that the competition for many common positions will increase, with companies showing their appreciation down to the front line, they will have an easier time selecting the best employees from the get go. It is important when operating any business you hire people that fully support what your brand stands for, if they don’t, what is the point in having them around? It’s harsh but true.

It is important when operating any business you hire people that fully support what your brand stands for, if they don’t, what is the point in having them around? It’s harsh but true.

Starbucks is smart, they know that by introducing such a program, they will attract some top tier talent, while building their own brand of as the “coffee shop that cares.” While the program might not have been the miracle many first believed it to be, it does exemplify the current direction of the workplace. If companies don’t show their appreciation for their own employees, their own employees won’t show them love when talking to friends.

There is nothing more powerful than having a strong internal culture while cultivating your external brand image.

I am a recent addition to the Cult team and specialize in marketing communications. I have worked with some of North America’s most well known brands, helping them refine and perfect their communications execution while building their brand and engaging consumers. To me, the greatest reward is seeing something you have worked so hard for come to fruition. I love working with people who have different strengths than myself, learning from each other in the process.
Further Reading
See All
Chris Kneeland
April 4, 2020