Cult Collective is the proud recipient of two Summit Creative Awards (SCA) for its work with Mark’s Imagewear line in the business-to-business sector.

The SCA’s, part of the prestigious Portland, Oregon-based Summit International Awards (SIA) organization, are exclusively awarded to creative firms who have demonstrated the ability to produce smart work within a limited budget. Agencies from around the world invest their resources for the opportunity to be recognized as an SIA winner, and Cult Collective is thrilled to be counted among the bang-up list of 2014 winners.

Direct marketing is far from dead.

Cult’s initial market research revealed that the most common complaint among QSR corporate employees is that they do not want to receive promotional items that, “just prove that vendors understand nothing about the QSR business.” Another generic email blast, digital ad, Facebook/LinkedIn campaign or worse, a pen in an envelope, would have had a more negative effect than doing nothing at all. 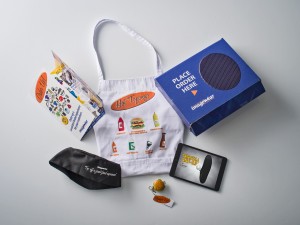 The award-winning “Place Your Order Here” project featured a coordinated box designed to look like a speaker from a classic drive-through. Inside, the box contained various items such as a chef hat, branded decals and a kitschy USB flash drive that looked like a hamburger. In an era where most of the advertising clutter is concentrated in the digital spectrum, sometimes, to be noticed, you need to use a different medium altogether. In this case, Cult drew from its experience with traditional direct mail.

In an era where most of the advertising clutter is concentrated in the digital spectrum, sometimes, to be noticed, you need to use a different medium altogether.

Cult understood that Imagewear’s industry is based on trust between the sales rep and the purchaser, who can be anyone from the office administrator to the president of the company. But how can trust be established in a situation where there is little to no awareness of the company? In the context of a sales-driven organization like Imagewear, a memorable, 3D piece like “Place Your Order Here” allowed the brand to deliver a multi-layered message through a medium that really was the only solution with that type of flexibility.

Ultimately, Cult helped raise Imagewear’s profile among QSR executives by sending decision makers something not only memorable, but relevant. Feedback collected after the campaign included comments akin to, “Imagewear got it right.”

Cult also received SILVER honours in the B-to-B Direct Marketing category, again for Imagewear by Mark’s. This time, Cult set its sights on the hospitality industry with its “Do Disturb Us” campaign.  Cult used the iconic image of a hotel’s Do Not Disturb door hanger and fashioned it into a clever Imagewear brochure that said “Do Disturb Us” on the front cover to incite interest. 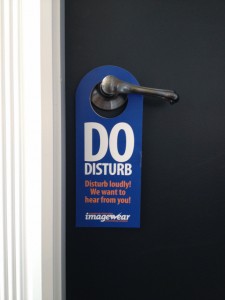 The limited budget for the campaign actually better served Imagewear in the end, as it compelled Cult to dig deep and imagine an idea that was feasible yet still noticeable, and one that packed a mighty punch within simpler design constructs.

The limited budget for the campaign actually better served Imagewear in the end, as it compelled Cult to dig deep and imagine an idea that was feasible yet still noticeable.

What did we learn?

Congratulations to all the people who worked so hard to make the “Place Your Order Here” and “Do Disturb Us” campaigns such a success. The takeaways from the Summit Awards recognition are that direct mail is not dead and marketing does not have to be an either/or scenario. Marketers simply have a wider selection of media options available today and, as always, agencies must treat every marketing challenge as a unique situation requiring its own, unique solution.

Marketers have a wider selection of media options available today and, as always, agencies must treat every marketing challenge as a unique situation requiring its own, unique solution.

I am a recent addition to the Cult team and specialize in marketing communications. I have worked with some of North America’s most well known brands, helping them refine and perfect their communications execution while building their brand and engaging consumers. To me, the greatest reward is seeing something you have worked so hard for come to fruition. I love working with people who have different strengths than myself, learning from each other in the process.
Further Reading
See All
Carson McKee
January 27, 2022