As a displaced Texan living in Canada the past five years, I admit its taken me a while to warm up to CFL. The field, the ball, the # of players and the rules all differ slightly from my beloved NFL so I was slow to embrace this new sport.

But as I was sitting at a Calgary Stampeders game the other night with my sons, enjoying a professional football game in July, I realized I’ve become a fan. And as I pondered my conversion to the CFL game, I was reminded of the Roughriders recognition at The Gathering a few years ago.

If you ask the guy who carried a Riders flag to the top of Mount Kilimanjaro, he’d tell you: the Saskatchewan Roughriders isn’t just a team. It’s a religion.

How else do you explain a franchise that successfully sells merchandise for newborns and has fans who demand to be buried in their jerseys? The Roughriders are the epitome of a cradle-to-grave brand.

The Roughriders have achieved cult-like devotion, not only in its home province, one of the smallest professional sports market in the world, but around the planet. The Roughriders have expanded beyond all expectations to become a globally recognized brand. 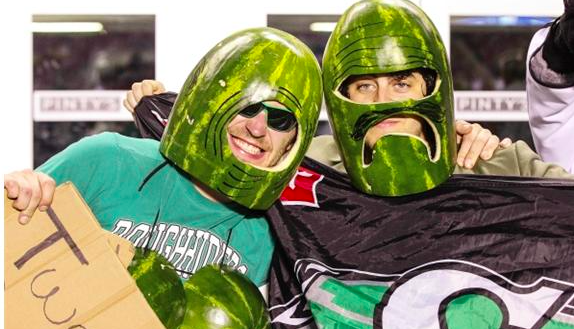 The Roughriders garner the all-out devotion and fanatical following only the most cult-like brands receive. They sell more merchandise than their entire league combined. Fans have downloaded the Roughriders mobile app in hundreds of countries around the world. Before the 2009 Grey Cup, Calgary grocery stores had to rush order 3,000 watermelons to appease the hordes of fans who honour the team by wearing the fruit on their heads.

Even the Dallas Cowboys, one of the most adored professional sports brands in the world, flew a team to Regina to ask them how they did it.

So how have they done it? The Roughriders recognize that serving its fans brings the greatest reward. “The more we give to our fans, the more we appreciate our fans, the more love and dedication that we get back,” says Gregg Sauter, Vice President of marketing and business development. “Obviously we want to generate revenues, but we want to generate revenues so we can give more back. We can put a better team on the field. We can have players that want to play here because we have the best facilities.”

Part of the Roughriders legend is the team’s turn- around from multiple brushes with bankruptcy, a strategy executed by listening to its core fans and giving back the complete game-day experience they wanted, from merchandise to pre-game parties.

By keeping their ears tuned on what their fans are saying, the brand leaders have worked to foster a fraternity that people want to be a part of — and they are. That the Roughriders are a community-owned team gives its fans an even greater stake in the team’s success, embodying pride and passion on the field, and throughout the community and nation.

Community initiatives to engage people of all ages have been wildly successful, from youth development to university clubs to family engagement.

Rallying its following around a shared passion, the Roughriders is a brand committed to giving back and they live that promise. Pre-party games are fundraisers for charities across the country and the team’s Alumni Association organizes events through- out the year to raise money for amateur football in Saskatchewan.

Cult-like brands have a human voice that followers can relate and connect with, a creed the Roughriders successfully lives by. It’s that sense of relatability the Roughriders has encapsulated in its image through- out the brand.

“Being part of Rider Nation is like being in a terrific club, right?” says Sauter. “The great thing about not only the Riders, but sports in general, is that on any given day, you could be at an away game in Edmonton or Toronto and you can be in a bar or pre-game Rider party and you can be the CEO of a company or a guy who’s sweeping the streets, but for that moment you’re brothers and you’ve got your jerseys on and you don’t care who you are. It’s pride in everything the Riders stand for.”

I graduated with Master’s degree in marketing communications from Northwestern University and worked client-side at John Deere and The Home Depot prior to selling my soul to join an ad agency (Rapp) in Dallas, Texas. In 2010, I moved to Calgary to run Watermark Advertising Design. Then, in September 2012, I resigned to join a Cult.
Further Reading
See All
Carson McKee
February 14, 2022