The Loyalty Storm Brewing for Banks, Wireless and Cable Companies
How often does your bank surprise and delight you?

How often does your bank surprise and delight you?  For customers of TD Bank, it’s a common occurrence – from its being open seven days a week, 17 hours a day, to its product offerings, low fees, problem resolution, and lollipops for the kids and dog treats for Rover.

But one day last July was particularly special for its Canadian customers. Employees across the country distributed a $20 bill to every customer in the bank’s more than 1,100 Canadian branches.  Thousands of other customers using phone or online services received a direct deposit in their accounts.

And a dozen carefully selected customers got a special thank you at their branches through an “Automated Thanking Machine,” which provided them with trips, gifts, customized experiences, and contributions to education savings plans for their children. Not surprisingly, the bank has ranked first in overall client satisfaction in J.D. Power’s Canadian Retail Banking Customer Satisfaction Study for nine years in a row.

Contrast this with the 2014 Customer Service Hall of Shame, compiled by the financial news operation 24/7 Wall Street in collaboration with research group Zogby Analytics.  Of the ten worst companies this year, three are big banks and, for the sixth year in a row, Bank of America tops the list. Six of the other seven worst companies are wireless carriers or cable or satellite TV providers.zen carefully selected customers got a special thank you at their branches through an “Automated Thanking Machine,” which provided them with trips, gifts, customized experiences, and contributions to education savings plans for their children. Not surprisingly, the bank has ranked first in overall client satisfaction in J.D. Power’s Canadian Retail Banking Customer Satisfaction Study for nine years in a row. 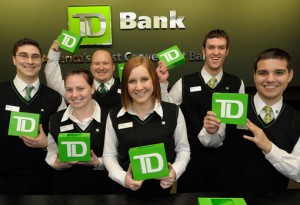 None of this comes as any surprise to anyone who has seen their bank raise fees, tried to switch cable providers, or been hit with data overage fees on their mobile phones. And to those perennial complaints, you can add the part played by banks in the financial crisis, as well as consolidation in the cable and wireless industries that is reducing competition and any incentive to provide better service to customers.

Big companies get away with this because they have the resources and market power to limit customer choice and mobility.  That’s why seven of the ten companies in the Hall of Shame still dominate their industries, despite ranking near the bottom of surveys measuring public trust and respect.

In the business world, such heavy-handed tactics are perfectly legal and often applauded by shareholders, but they are also fundamentally at odds with the natural triggers of human trust and loyalty.  Through millions of years of evolution, humans developed the ability to discern when others are befriending us with the goal of taking advantage, and we naturally avoid those who are selfish, amoral and untrustworthy. As a result, within each of us is a natural human desire to associate only with those who mean well and are good at what they do.

We have an innate preference, dating back to the stone-age, to seek out relationships characterized by these twin qualities of “warmth and competence.”

We also have a similarly primal urge to punish those who betray these two principles. We may be trapped into doing business with them for now, but we will be plotting our escape and revenge along the way.

The bad news for big banking and the others is that the Internet, social networks and mobile devices have turbo-charged our ability to demand warmth and competence from others like never before. Spontaneous Twitter and Facebook campaigns, for instance, have already brought countless bad-acting companies to heel. The business landscape has changed forever, and companies of all kinds will need to re-shape their policies and practices to align with this new level of social accountability if they want to survive.

Companies that rank high in warmth and competence are currently disrupting nearly every industry. For instance, Ally Bank is able to engage customers online and win their loyalty by appealing to their natural human desire for simplicity and transparency.

Ally was recently recognized by the Pew Charitable Trusts as tops in the nation for its transparent practice of disclosing checking account fees. Ally, which charges no monthly fees and no ATM user fees, claims a 94 percent customer satisfaction rate. It announced in May that deposits had reached to $45 billion, representing a 30 percent average annual growth rate since 2009.

For now, big banks, wireless carriers, and cable and satellite TV companies can continue to twist customers’ arms for quick profits, thanks to their contracts and high switching costs. But time is rapidly running out on this exploitive practice, and the short-term gains they have briefly enjoyed will pale in comparison to the painful long-term consequences of having flouted human nature for decades.

Chris Malone is Founder and Managing Partner of Fidelum Partners, which is based outside Philadelphia in Newtown Square, PA. Chris has over 20 years of sales, marketing, consulting and organizational leadership experience, and a track record of driving growth and profitability. He held senior marketing positions at leading organizations such as Choice Hotels, ARAMARK, Coca- Cola, the National Basketball Association, and Procter & Gamble and has consulted to a broad range of Fortune 500 companies. Chris is also co-author of the award-winning book, The HUMAN Brand: How We Relate to People, Products & Companies, which was published by the Jossey-Bass division of Wiley Publishing in October 2013.
Further Reading
See All
Amy Machin
November 28, 2022